No child right in Tanzania-A sad cry from Muheza I remember in 2009, the united republic of Tanzania president in a majestically manner signed the so called “Child act” I am sure that he signed that act in a Bona fide faith good faith... Yes in good faith because he is not an implementer of that act! I guess you know what I mean! Now listen to this saddest story from Muheza, it not fictions story it is a true story which needs condemnation from any human being who is mentally fit….!! Mariam Abdallah Bigo, a form two student and a mother to six months Abdallah Mtaba alias jumaa [Born 27/22/2011] was born on 25th May 1995 in Muheza, after completion of primary education she passed final exams and selected to join Nkumba secondary school in Muheza district, because she is paternal orphan she was enrolled in pamoja tuwalee project at Muheza hospice care, the project implemented by WEI Bantwana with a head office in Arusha Tanzania. “Mwalimu Mtaba was approaching me since when I was in form one, I refused to honor his evil request, what followed then, was a string of continuous punishment which includes cleaning schools’ toilet, canning, inhuman harassment which is unmentionable…just to mention a few, these harassment continued nonstop until when I was in form two I bowed to his request and we started love affair with him, it was at that time when all those agonies stopped abruptly.” But another problem surfaced, Teacher Mtaba was also a boy friend to a fellow teacher known as Agnes, since there is no secret under the sun, Teacher Agnes came to know about that affair and directly started to attack that paternally orphan poor girl, Teacher Agnes went further by complaining to school administration that she was beaten by Mariam, under unknown circumstance the School; board suspended the poor Mariam 2010 July, it was February 2011 when she discovered pregnant she informed her partner Teacher Mtaba whom she advised her to abort the pregnancy giving her 100,000/=. Mariam refused, the action which caused teacher Mtaba to face Mariam’s for an appeal, when Mariam mother refused the teacher told her he is not concerned with Mariam’ s pregnancy and he don’t want to be involved in any way. Since Mariam was under pamoja tuwalee project, the mother reported that issue to project manager at Muheza Hospice Care, the project started to follow up a case with the help from district council legal officer, from the start the proceeding was not good, although the prosecutor indicates fairness but all signs of unfairness from magistrate was clearly shown. The mother came to office and complains about court clerks behaviors who seem openly to be kick backs middlemen, the manager responded that “as far what you have observed is concerned the probability to win that case is narrow although the case clear…I don’t want to intervene the court freedom because I know that if they will victimize that poor girl, we will appeal” It was last Thursday 19th April 2012 when the case came for judgment, the judgment which to utter in disdain was vindicated that THERE IS NO CHILD RIGHT IN TANZANIA… I swear to God! Why I am affirming that, the “excellence “magistrate acquitted that culprit on the following bases: The court was not submitted with birth certificate to show that Mariam is aged 16 years. Mariam during her pregnancy was not a student after expelled from school for lack of discipline because she was in a quarrel with teacher Agnes over love affair with a teacher. The mother didn’t testify on which dates the teacher met with her daughter!!!!!!!!!? “In view of the above I hereby set this “rapist” free”. The pamoja tuwalee project team which was in court and Mariam relative was not able to avoid tears from their eyes. This was very sad, sad indeed because the judgment didn’t consider the future of that project grandson- Abdallah Mtaba, taking in mind that teacher Mtaba he didn’t deny her paternal relationship with that poor kid. But still the court set him free… where is the child right under such circumstances? This is a shame to our country, shame to legal systems, shame! Shame! Shame! To the maximum! And it will be a shame to all child right stakeholders if we will not fight for this poor child right. Tanzania we are lucky to have very good policies, very nice ones, for example under NATIONAL STRATEGY FOR GROWTH AND REDUCTION OF POVERTY II section 4.2 Cluster II- Improvement of quality of life and social well -being which focuses on improving quality of social services [education, survival…] one of the expected outcome is-quality of life and social wellbeing for enhancing capabilities with particular focus on the poorest, people with disabilities and other vulnerable groups improved. But our legal systems are against of this! Coming to same policy 4.3 cluster III on good governance and accountability- states clearly that Good Governance and accountability are fundamental components to shaping a favorable environment for economic growth and poverty reduction it further states that – poverty reduction, social harmony, peace and national unity require that all citizens are treated equitably in terms of access to public services and goods. For sure we have good policies in papers which we fail to implement! Pictures below: on the left is Mariam with her son, and on the right, Mariam’s mother, Saida Lukuta holding her grandson 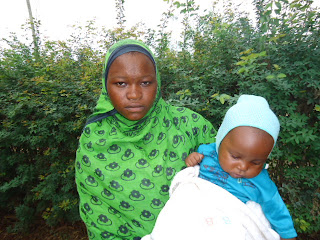 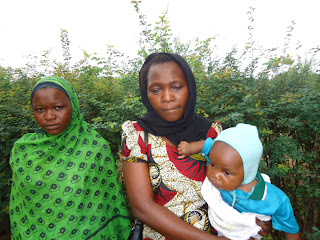 Tanzania also we have the so called CHILD DEVELOPMENT POLICY Tanzania being one of the UN member states has ratified the convention on the right of the child, one of the basic rights is survival rights, development rights, protection rights etc which Muheza district court denied it! May be the court is above the law or the magistrate is above the law on the sense that s/he does anything or manipulate the law as to his/her wishes. Worse enough page 14 of that ECD states clearly that under section 26- institutions involved in enforcing laws including the ministry concerned with legal affairs, the police and the judiciary should ensure the rights enriched. But that is not the case in Muheza district, and I sure that this situation happens all over Tanzania! Thus why I am concluding that there is no child right in Tanzania It is not my intention to lecture you on how child right is abused in our country, but to beg your assistance on this issue and make sure that the poor Mariam remedied! God Bless you all
Posted by muhezahospicecare at 5:03 PM No comments: